3 Pages on One Song

You could be on an empty city street after all the people have left. Trash and old newsprint flutters around the street in a feverish wind and hits telephone polls and overturned trash bins. There’s evidence that people may have been here in the recent past, but they aren’t here now. You could be the last survivor in the dirty, moist hallways of a post-H.R. Giger spaceship, stuck in a nihilistic alien parable. You could miles underground, the last of your or any other people, just waiting. Looking around corners, feeling the moisture collecting in pools, watching everything rust. You could be driving on an abandoned highway toward some perilous errand or other, the yellow lines passing beneath your headlights monotonously. Your mind is heavy, you’re very alone. All of these images, these places in the subconscious can be reached with precisely three chords and a hip-hop drum beat that can be described as a lot of things, first and foremost: aggressive. Before the lyrics, before Tunde Adebimpe’s haunting falsetto, before Gerard Smith’s organ, before Katrina Ford’s catchy, yet foreboding “lah-lah-lah”s, before the whistling that sounds like it was recorded over your grave, before anything else, there are three low, low notes on a keyboard and a drum beat.

TV on the Radio might be said to be professionals at mastering atmosphere. Their songs are hard to peg as being a part of one particular style; on any given TV on the Radio record you’ll find a hybrid of R&B, goth rock, post-punk, funk, and hip-hop, and yet you’ll be no closer to describing their overarching sound. One thing has been true from the start, however, and that is that the music of this Brooklyn band always elicit feelings and images. Any given TV on the Radio song will put you in some place new and different in your mind. The droning beauty of “The Wrong Way” or the furious chorus of “Wolf Like Me” can take any listener to a lot of very dark places and they will undoubtedly have a damn good time exploring them. Their latest album, Dear Science, takes a less forward approach to their usual mood creation. Instead of the soundtrack to a film about the end of the world, Dear Science seems to the playlist used at the party before that same end. Much more upbeat funk and soul influences come through than the mindbendingly excellent gloom they’d perfected. A stylistic shift like this one is welcome, of course, but it’s also a welcome relief to know that not every song is completely different; I did like those spookier songs. And so on Dear Science there are a few songs that capture that older sound that many fans may pine for after the psychedelic funk of side A. Foremost among those tracks that bring back a doom-laden nostalgia is DLZ.

DLZ is, as it’s lyricist and creator Tunde Adebimpe puts it, a testament to death’s lasting effects. His lyrics strive to correct the idea that after death, your legacy is done with and you can no longer achieve anything. Anyone who, like Adebimpe, lost a friend or someone close, knows this to be false. The subject matter is very heavy and in most other hands would probably be either a slow-burning post-rock ballad or a sparse, introverted tune on a battered acoustic guitar delivered coldly and nervously. Adebimpe’s take is quite different and takes on a much angrier quality than most songwriters do when Death is the subject. Injected with Adebimpe’s slick enunciation, confident delivery and the sheer musicality of his voice, DLZ is a tough song. His opening words, delivered lightly, are cryptic; if their meaning isn’t immediately clear, certainly the message is. Adebimpe’s seething near-whisper betrays his mood even if his words don’t. “congratulations on the mess you made of things, On trying to reconstruct the air and all that brings. And oxidation is the compromise you own, but this is beginning to feel like the dog’s lost her bone”. It would appear as though Adebimpe is playing devil’s advocate, fueling his own argument. Congratulations seems to mock the subject of his berating, and oxidation immediately brings up corpse imagery; despite your best efforts, you now rot, every second you’re body lies underground, death takes its toll on your human form. Thus all you’ve achieved is as impermanent as your earthly flesh.

At about this time, that spooky organ begins it’s dance behind the drums, conga, and that same three chord synth-bass line. Death must surely be the topic of debate; if you isolate that great organ line, you might just see skeletons dancing jovially about a bonfire. “You force your fire then you falsify your deeds, your methods dot the disconnect from all your creeds. And fortune strives to fill the vacuum that it feeds, But this is beginning to feel like the dog's lost her lead” This line is a bit tougher to read, but hypocrisy is still on tap. The disconnect from all your creeds could refer to the contradictory views on death in most cultures, especially those cultivated and kept in America. In my hometown, a priest who had spent a lifetime telling widows and orphans that god had sorted it all out in a master plan couldn't handle his own grief when his brother passed away late in his life. Suddenly, his life's work seemed as shambolic as a circus fortune teller. He didn't have the answers, he was just as alone as anyone else. Worse still, what did it mean that he labored over his own personal tragedies but had swept so many lives under the rug? Did these people not mean as much as the life he had lost? No, the families of the deceased whom he had spoken to beforehand just got cheated. Some of that anger seems apparent on this song.

"This is beginning to feel like the long-winded blues of the never" His pronunciation becomes assured and quick. The word never means a lot. The music matches him beat for beat, getting louder as he gets angrier. Who can say that you will never mean anything? Who can say for sure that something will 'never' happen? "This is beginning to feel like it's curling up slowly and finding a throat to choke." He spits out words like accusations at a trial all volume and fire. Death must take someone, it comes to all of us. Someone close to him. "Barely controlled locomotive consuming the picture and blowing the crows, the smoke." Death is a train now. Crows, those that haunt cemeteries, smoke all that remains once it has taken any lingering hope of legacy, burned it as fuel and continued on its way, your memory not formidable enough to stave off becoming what all people become - dust. "Static explosion devoted to crushing the broken and shoving their souls to ghost."As if it needed to be said - death. You will be forgotten. The musical elements - organ, drums, percussion, the backing vocals, a new screaming ghost-like synth line in the back of it all - all whirling around each other behind Adebimpe's mighty cries. Nearly deafening in it's combined power. "Eternalized. Objectified. You set your sights so high." To want to achieve immortality is but the wish of a immature child. "But this is beginning to feel like the bolt busted loose from the lever." An error to be corrected, nothing special. 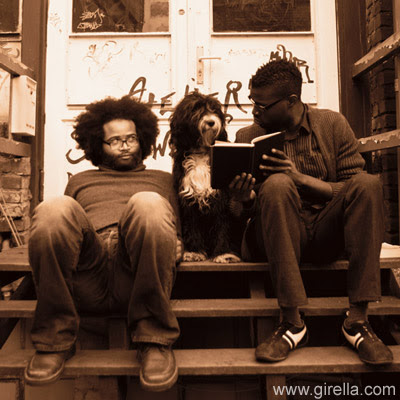 Just when things seem at their peak - volume, anger, argument - then comes the gut punch that carries you to the end of the tune. Quiet, the eye of the storm and then Adebimpe roars out like every kid killed before his time - the choir of the unsatisfied dead. "Never you mind Death professor" like a circular saw tearing through the notion of the afterlife and every frocked consoler who champions forgetting and moving on. "Your structure's fine, My dust is better" more bitter sarcasm as the volume reaches its peak. Your way of looking at things is the superior one to mine, that I'm dust and nothing more is acceptable. I should just move on. "Your victim flies so high All to catch a bird's eye view of who's next." Heaven exists simply so that you look down onto Earth and see which of your friends will be turned to dust next. Your life on earth is just a stepping stone - now get over it. This childish world view, designed to get children to behave has infuriated intellectuals for centuries - Adebimpe's concern is simply voiced louder. Loud enough for all to hear. "Love is life, My love is better." The horns come in beneath it all like the voice of the long dead joining in on the indictment of millions of years of backwards thinking. "Eyes could be the diamonds Confused with who's next" Who shall go next? "Your shocks are fine, My struts are better. Your fiction flies so high, Y'all could use a doctor Who's sick, who's next?" The doctor quip could be a few things - those who believe in death being the next stop could need their head examined. Those who think that they should lay down and wait for death as it grants all our wishes could also use a physician to slow the decaying down. The end draws near. "Electrified, my love is better It's crystallized, so am I. All could be the diamond Fused with who's next," My love is crystallized and I am too. Like a mosquito encased in amber, all your feelings, impact, interests, passion, all of it encased forever; it is unmoving and affects no one. You're body and everything you've done are at rest never to move again.

The message has been sent, we must now receive it. The music quiets and things return from the crazed heights they'd just reached. "This is beginning to feel like the dawn of a loser forever". Perhaps birth, perhaps death. Dawn of a loser forever. Anyone who feels life is secondary to the afterlife? Anyone who died believing they meant nothing on earth and shall forever mean nothing? Anyone who, with that in mind, decided never to make anything of themselves? Anyone who thought the love they gave in their lifetime, the skin they touched, the lives they've changed, wouldn't last longer than the seconds it takes to bury them? Adebimpe repeats the line again and again as things fizzle out, as things die. The message, the song, the voice, will live on even after everyone dies.
posted by Scøut at 1/27/2009