I ask Sam about something I'd always been curious about: the difference between fame here and fame in the states. “Has that ever fallen by the wayside when you’ve played Lollapalooza or Austin City Limits, big festival crowds?” 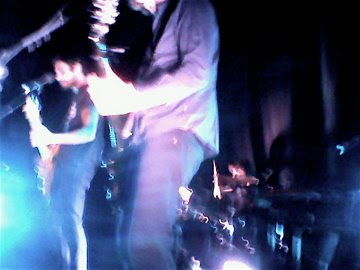 “It’s a great feeling. In our minds it reveals the potential of what could happen down here if a few chips fall into place. Because the crowds at ACL and the crowds at Lollapalooza have been as responsive to what we’re doing as any of our fans up in Canada. It just goes to show that there’s not a vast cultural divide that’s preventing us from making a connection. I think all the ingredients exist for that connection; I think it’s just a case of opening a few doors. I don’t think we ever expect anyone to open them for us. That’s what we’re on this tour for and all our tours we’ve had.”

“For sure. Like you said, the golden age, the roots of rock and roll comes from down here and we are all borrowers. The English took it and made it their own and sort of repackaged it and sent it back. The Canadians have done the same thing. This is a pilgrimage to come down here and see the places where rock and roll music was born and the culture out of which it grew."

“What sort of music did you listen to, if not necessarily as a child, than while you were planning your musical take-over?”

“Well, my dad was a big Bob Dylan fan. Really big Bob Dylan Fan, die-hard fan, and he had me listen to that from a very young age and he was also really into blues and I guess the blues are the real roots here, especially for the kind of music we play. So I’d listen to anything from Muddy Waters to Chuck Berry and Little Richard and onwards to Bob Dylan. And he had me listen to Peter Green Splinter Group and (Paul) Butterfield Blues Band. A lot of Americans. Tom Petty, a lot of Tom Petty. So all that has found it’s way into our music.” 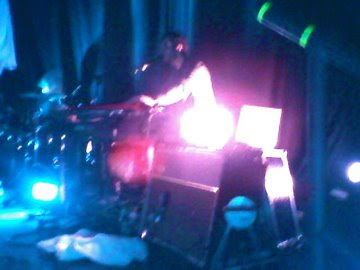 At this point, the man with the beer arrives, and Sam’s joviality takes over. Sam and the band have an undying sense of family. Everyone, myself, their wives, children, Mother Mother, the opening band, beer guy, everyone is a part of a family. After he leaves, we pick up again with a loaded question that I'm pretty pleased with myself for asking.

“Did you ever listen to the Flock?”

“My dad listened to the Flock.”

“I hear a bit of that in some of your music.”

“Well, his record collection, which I’ve now stolen from him, is all in there. There’s another band, a British space rock band that my dad ran into, under whatever kind of circumstances he was living under when he moved from South Africa to England for a couple years, he got into this band called Hawkwind”

“And I really like Hawkwind, too. And I think a lot of our psychedelic side to our band has been influenced by that.”

“There seems to be less of the psychedelic stuff on Love At The End Of The World. It’s a more concise vision, there’s a less of a runaway feeling.”

“In a way, yes. In a way I wanted the songs to be songs that I could strip down and play acoustically and then play with the band, have them somehow still find a way to relate to the other material on Chemical City and We Were Born In A Flame and whatever else. But at the same time I did want them to be just a bit more concise and to the point. A lot of that is a product of how you’re recording the record. Chemical City; it was inevitable that it was gonna come out like that. We were in a church in Australia on the edge of a coffee and macadamia plantation with chickens in our kitchen and frogs in the toilet. It was surreal and the music takes on some of that quality. ”

“How did you get there?”

“We just decided to go. It was literally just “spin the globe and point a finger.” And I think we realized that this was probably the last big budget record we ever gonna get based on our old record deal that we had; that this was gonna be the last time we were ever gonna get to pull a stunt like that. And we went for it. I also felt like that I needed to move again. That travel and adventure has always been a part of my relationship to making music. So, we went to Australia. And this record [Love At The End Of The World] we were at home and somehow trying to draw inspiration from this place you’ve lived in. And it inspires you in such a subtle way that it’s hard to tap into this blinding, lightning bolt style inspiration that you may be looking for. We had to refocus the lens a bit, see things differently; see the same things from a different angle. And that’s what this record ended up being. For me it was very new, unique and ultimately rewarding way of recording songs; Being in Montreal instead of the panic-and-flight reaction I’ve always had before. Get the hell out of there as quickly as possible. ”

“That makes sense, because here more than anywhere else, you talk about permanence….”

(I lose my train of thought here and come dangerously close to revealing myself to be the ultimate amateur; calling attention to my feeling so small in a room whose sole occupant may as well be ten times the height he is. He is a giant filled with love and he sits not feet from me, making it hard to focus and pretend that I’ve done this before. He steps in, ever willing to say something insightful)

“The whole idea of permanence, when the times are changing faster than you can keep up with. You start to look for the things that can anchor you in some way. This record is trying to acknowledge both of those things. The unpredictability of the world we live in and the few things we can hold on to. To give you some kind of frame of reference to keep things in a more manageable sphere.” 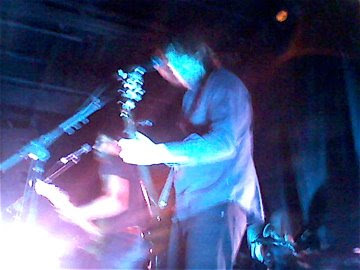 “Is that what you meant when you said “Can anyone here tell me what they felt like” (a line from Detroit ’67, the final song on Love at the End of the World)”

“Yeah, cause I don’t fuckin’ know. The more you can kind of go out and learn from other people and take other people’s experiences and co-opt them or at least learn from them….That statement is me saying, “I know that they were good or I think that they were good. There was something there we need to hold on to. But I wasn’t there myself so please share it with me." Tell me what it was so I can take those lessons and apply them to my own life and take the solace and the comfort they may have provided and incorporate them into times when I need that. The whole idea, especially of this record, is that we seem to constantly be pulling back to the past for those lessons to help us correct our course. And it’s not even up for debate. There are ways that we’re clearly going wrong. There’s almost comfort you can take from that; we can see it so directly. Everything seems pretty black and white in 2009.” 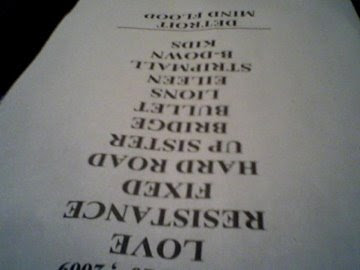 “If there were one or two things you could change right now, what would they be?”

“First, for me…but again, all of this is connected. So I can’t just say I want us to take a far more serious look at our environment and the way we co-exist or choose not to co-exist peacefully in the world we live in. That to me is the most irrational human endeavor at the moment. The destruction of the light source…it’s mystifying to me. Again, why is that? Why is it like that? And I think it winds up tying into the greed and censorship that’s led the economy to collapse. It really is our fault – it’s our incredible, incredible ability to wreak havoc on the world that we live in. There’s such a great opportunity to do something better. And there is good. That’s why the record is called Love at the End of the World. There is good. There are those selfless act that inspire you and give you hope. The love and altruism that do make the world a better place to live in wrestling with the self-destructiveness, selfishness instead of selflessness. And it’s a tug of war really.”

I think I love this man