Not going to a show to see the headliner is something I should be used to by now, especially considering how many of my friends are in bands. Somehow, it always comes as a surprise when I show up expecting hometown crowds and there are ten thousand preteens and just as many people who'd shown up expecting bar blues. Of course that's not what I'm here to talk about, but it does go a long way toward explaining the deafening reception that greeted not just the headliner on the 13th of December at the House of Blues in Boston, Arctic Monkeys, but the opener, the all but unknown Screaming Females. Those were the guys I'd come to see. I've seen them in concert three times and each time they seem to get better and louder. The first was at Siren Records, the independent music store I work for whenever I'm not at college. The second was at the Middle East on their first tour after spending a few weeks opening for Jack White's other, other band The Dead Weather. And now at the House of Blues I saw them in a properly huge venue in front of a crowd who had come to see anything but them. Though I was a bit nervous about how this crowd of ravenous Arctic Monkeys fans would receive them, of course, they killed. 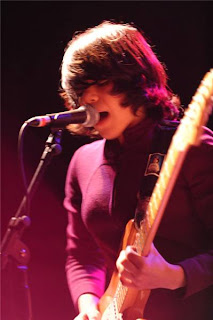 Screaming Females' Namesake Marissa Paternoster
The band, Jarrett Dougherty on drums, 'King' Mike Rickenbacker on bass, and Marissa Paternoster on guitar and 'screaming', have a sound that's a touch hard to put a name to. I've thought long and hard about it and the conclusion I came to is I don't care, I just know that I love it. There's rock, to be sure, roving, catchy and louder than hell. There's blues, in a Jeff Beck-era Yardbirds kinda way. There's punk, a sort of late 70s Banshees/Clash minimalist tone. There's classic metal in Paternoster; though only slightly taller than her guitar, Paternoster is a frontman that makes all other frontmen seem inadequate. She speaks little, shreds a lot, has a voice that's half Erika Wennerstrom from Heartless Bastards, and half Ian McKay, and she lets both sides roar in equal measure. Her guitar playing is without compare today. Even when only laying down rhythm she seems possessed, her hands never at rest, burning holes on her fretboard and bleeding from the tips of her fingers. Like Beck, Page and Omar Rodriguez-Lopez, her technical prowess is flooring, especially considering how effortlessly she seems to be pulling her solos. The rest of the band are more than capable of providing a bleary-eyed canvas for her to throw herself on. Marissa told me before she went on that because the tour had attracted so many young boys, the comments they'd overheard had largely been negative. Girls aren't supposed to make boys question themselves and Paternoster lives to stem the tide, so you can see where the confusion might start. She is not a nordic idol relegated to tambourine or keyboards, nor is she the ultra-hip indie girl in cute clothes, she's something else, something fourteen year old boys don't know how to react to. Yet somewhere in the middle of their amazingly catchy songs like "Bell" and "Halfway Down," both from their latest record Power Move, or my personal favorite "Baby Jesus" the Females turned the uncertain crowd into a gang of Screaming disciples. They wanted more, which if the band is to be believed, was a first on this tour. 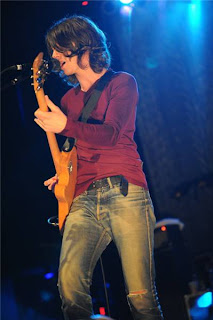 Alex Turner, Teen Idol
Now farbeit from me to belittle other bands, especially bands I like, but it's always going to be hard for any guitar based band to stand up on a bill with Screaming Females. Arctic Monkeys didn't sound too dissimilar from SF in their first incarnation, the bunch of sleepy-eyed kids who gave us Whatever People Say I Am That's What I'm Not, a dose of pop irony delivered like a hit from a jackhammer about the rotating cast of derelicts to be found in the suburb of Sheffield England they come from. Since then, frontman Alex Turner has released a record a year, two with The Arctic Monkeys and one with The Last Shadow Puppets, an Ennio Morricone-influenced record replete with dusty production and melodramatic narratives with orchestral arrangements courtesy of Owen Pallett. So what's changed about Alex Turner's best known band since their debut in 2006? Well they've found a fan base, that's for certain, but they've also made their shows and songs grander events. 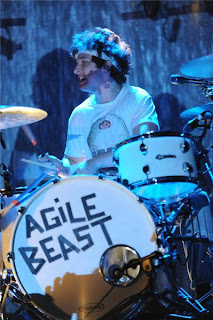 Matt Helders/George Michael
Turner, who's long hair somehow just makes him look younger, is no longer just a singing guitar player, he's a proper frontman. The addition of a multi-instrumentalist on keys and guitar means that when plowing through new or old songs Turner can strut and bask in the revelry of the crowd. Turner's admittedly modest show-boating over the band's bouncy post-punk sound and new found bluesier edge makes them feel like a modern day Ian Dury & The Blockheads. Each song is an event, not just a quick and razor sharp rock song. The pregnant pauses that litter their set now serve as enticement for their rabid fans, each one longer than the next. The crowd ate up Turner and Co's theatrics happily. They loved the sing along, providing verse and chorus of relative hits like "I Bet That You Look Good On The Dancefloor" and "Fluorescent Adolescent." I was bummed that they didn't take out "When The Sun Goes Down" the most mature of their early songs, the one that singled them out as the next big thing back in 2006, but the night was far from a wash. "Brianstorm" or "The View From The Afternoon" and "505" their epic closer showed them at their most intense. Matt Helders' drumming remains some of the most impressively virtuosic around and I was willing to forgive five minute versions of some songs just because he was such a powerhouse. It helped too that during the encore he gave a wonderfully fatuous rendition of "Last Christmas" while Turner and the others played Wham! to his George Michael. Though sporting a pair of sunglasses, I suspect that behind them he winked so loud the monitors picked it up. The crowd had come to be entertained, and everyone, young and old, fans and parents of fans, left with something to talk excitedly about.
posted by Scøut at 1/17/2010