“I wanted to make a film different from all other films. I wanted to break new ground in cinema.” Carl Theodor Dreyer was a different kind of director and this quote, given in an interview about his 1932 masterpiece Vampyr, proves just that. Dreyer would spend his life making films of a wholly different class than his peers that would be largely ignored upon their release only to be reappraised and hailed as classics years after the fact. His varied career saw him receive the attention and admiration his work deserves but once when, in the event of the premiere of his last film, Gertrud, his many admirers in the film world arrived, among them Henri Langlois, Georges Franju and François Truffaut. I first encountered Vampyr, which would become my favorite of his works and among my favorite films of all time, when I was 16. I watched it on a whim, seeing only its shocking title and bizarre one-sentence description (the plot is hard to sum up, but the action is evident enough: a man meets an old man, his two daughters and a vampire). I was immediately transfixed and watched the rest of the film in dead silence, not daring to turn my attention elsewhere. It was in poor shape but that only added to the sense that the film was somehow forbidden. Its dreamy camera-work supercedes the narrative and I came to see that Vampyr doesn’t obey the logic of the real world. It haunted me for years; I couldn’t get its more absurd images out of my head or for the life of me see where the hand of the filmmaker lay. When I was 18 I decided to try and remake it, a decision which took two years to come to anything like fruition and which would inadvertently land a few Film Punk staffers in jail. It was a disaster because I was trying to conquer the movie, trying to see where the enigmatic Dreyer started. I didn’t realize that there is nothing that can be done to improve upon Vampyr; it is the perfect experimental horror film. In refusing to explain anything and by simply thrusting you and its doe-eyed hero into one haunted house after another that Dreyer was not simply making a film with horrors in it but he himself was taking you along, immersing you in the same world as any of his characters. He is god and the devil bringing you in and out of the light in a way that to my reckoning hasn’t been equaled since.
Vampyr
by Carl Th. Dreyer 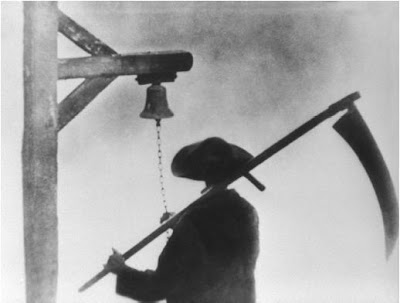 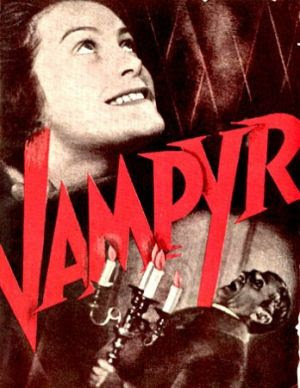 Finally there is a scene that must be talked about if the subject of Vampyr is to be exhausted. Grey’s final dream takes him to the lair of the villains where he discovers their plans but his finding comes at a high-price: he has to watch his own death and burial. Out of body he ceases wandering and is suddenly on his back in an open coffin. The one legged man brings the lid over which has been put a window so his unblinking eyes can see out as the doctor and the vampire prepare to bury him. The one-legged man screws the lid on and everyone looks down at Grey’s face through the glass before they carry him to the cemetery. This most beautiful and terrible of dream sequences gives life to many people’s greatest fears and also illustrates the difference between the inquisitive hero and his murderous foils. Grey’s fears of watching the ground go overhead make him realize that there’s more to life than pursuing the supernatural and following the revelation he is able to get the girl. The housekeeper finds that the vampire’s coffin has been broken as if she had broken from the confines of hell and death. This difference marks the divide between good and evil for Dreyer. Those who attempt to deny death will be punished; those who see the difference and decide to act for the good of others will be rewarded. The doctor’s pursuit of the vampire’s help makes him just as curious about the shadowy underworld as Grey but greed and curiosity are two different things and they turn to death and love and eventually burial and rebirth. The doctor finds himself in place of the old vampire and Grey’s soul literally walks back to him so he can save Gisèle. It takes the experience of death in both cases and so we may believe Dreyer when, after being asked whether or not he achieved his goal in making Vampyr he stated simply “I have broken new grounds”
posted by Scøut at 2/19/2010