I'll start with a confession - the bad reviews for Only God Forgives were a challenge I was hoping to overcome. They always are, in a way. This one was a little different of course. It's Nic Winding Refn, whose every movie I either strongly like (the Pusher films, Bleeder, Fear X) or outright love (Bronson, Valhalla Rising, Drive). Bad reviews like this were a taunt I was more than happy to rise to. Y'all hate it? Well I'm gonna be the only friend this film has. Foolishness, of course, but I'm only human - also, as you all must know by now, stubborn. So of course I dove in and realized that everyone was more or less right. If it's a failure, it's at least interesting, if it's a success, it's not by any traditional rubric. It's charms are in its tableaux, I'll give it that. Ryan Gosling sitting, bathed in neon, his mother, Kristen Scott-Thomas smoking, the walls leaking light on the backs and sides of heads, illuminating eyes, a woman disrobing and handing her dress over, a bunch of sleepy Thai cops watching karaoke as if waiting for a vision to arrive, a room full of women who will not open their eyes, as if dreaming to avoid knowing what goes on in front of them. As narrative it's got too little to offer and no catharsis worthy of the name. A detective kills Gosling's brother out of a sense of cosmic justice, then Gosling's mother wants revenge, which he's none too worried or thrilled about actually getting. It's got nowhere worth going and it's in no particularly hurry to get there. 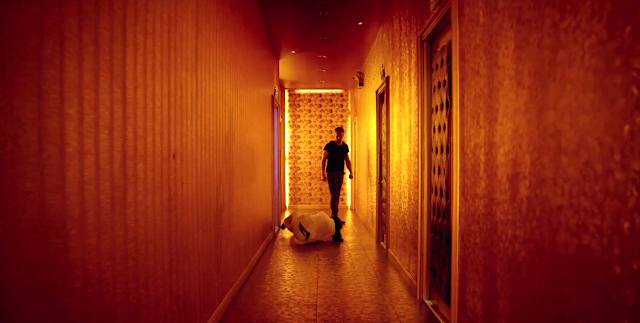 The problem I think is that he refined the areas least interesting to even most of his fans. Refn let loose is a lot of director in a little space. Look at Fear X (if you're not scared by its legendary bad reviews). It was the first film to show off what we can now call the Refn style. The slow pans and dollies, the intense lighting in eternally dark corridors, the color-coating of locations based around their relative safety, the dream-like slow-mo, the patiently observing action from a safe distance behind the fourth wall. Many of the hallmarks he'd sharpen in Bronson, Valhalla, Drive and Only God Forgives start at Fear X: the carefully textured surfaces and walls, the doom-laden soundscapes, the lonely man protagonist fighting a world he can't control, the third act freakouts where another medium is used to showcase the inside of its hero's brain. Being both fair and a little cruel Fear X looks like Stanley Kubrick doing a tour of a David Lynch set, throwing John Turturro in front of spaces that would soon be occupied by the denizens of Lost Highway, Blue Velvet and Mulholland Drive. Larry Smith, the last DP on a Kubrick film, became Refn's go-to camera man with Fear X, when he could afford him (its fiscal failure shook his security and made him go back underground in Denmark again), which meant that his films could for all intents and purposes, look like Kubrick's. A dream come true. The problem is the story doesn't support the stylistic 180 he pulled and there's nothing remotely satisfying about the ending - and I don't mean that in a Kafka's The Trial kinda way either. It sort of fizzles, like Refn remembered he had forgotten an ending long after they'd finished shooting.

Those problems are back in Only God Forgives, and if anything they're amplified because he doesn't even have a Hubert Selby Jr. screenplay to work from as he did on Fear X. All he's got are ideas he hadn't entirely thought through. The reason that Refn's previous three efforts in his chosen style work so well is that he's got something else to work with, or rather, against. Bronson is a remake of A Clockwork Orange, but based in fact. That's two different sources to work from; it was a matter of applying one to the other. For what it's worth, I think Bronson is the better film. Valhalla Rising is a viking adventure film. That's something real, something concrete, that he can look at with those laser-like eyes of his until he burns it into the shape he wants. Drive is an LA action film, so he just needed to hit all the beats and that's a job well done. That he made it one of the slickest, most penetrating looks at genre and the idea of a hero since the mid-80s is all the better. But the point is those films have stories built in. Only God Forgives is...what? Refn calls it Noir and mentions cowboys, but there's nothing here that you'd recognize as traditional. If it's noir, which template? There's no mystery and the revenge is half-hearted at best. Hardly Act of Violence. If it's a western the closest thing on tap is something like Johnny Guitar or Bad Day At Black Rock, but the same problem exists. Those films had through-lines - revenge. Gosling doesn't want revenge. We don't know what he wants. But he bums around, only partially committing to anything, and almost never for himself. And what exactly does the end mean? If the opening fantasy sequence is to be believed, he wants his own hands removed, making him even more passive and powerless, but that was before he knew about his dead brother...

Tempting though it is to start there, I haven't been able to successfully define it in light of what it's not (Western, noir, sci-fi, martial arts film, etc.). What are we left with, then? A hero caught between mammoth opposing forces he's equally in thrall to. A sort of mad glimpse into wonderland where Alice has no choice but to put up with Mad tea parties and foul mouthed red queens and a sword-wielding Jabberwocky? A sort of inverted riff on The Shining, perhaps, with the mother acting as the dormant madness in her son? A sequel to Drive? Nothing quite gels. On top of that there are technical problems. The editing can feel totally arbitrary. The sound design can go quickly from sublime (a scene of Gosling serenely watching the object of his lust and beating a man for disrespecting her) to unbearably cheesy (anytime the detective pulls his sword I cringe. The Shaw Brothers would have shaken their heads at those noises). And why mute one of the karaoke scenes if they're so important? Cliff Martinez's score work as often as it doesn't. And the worst of it: shooting on digital Larry Smith and Refn have found that peculiar mix of weightless action and ironic distance that so ruins Barry Lyndon, Clockwork Orange and Full Metal Jacket for me. At their worst, these people don't seem real at all; they're like marionettes being dangled on a well-lit stage. It's the quickest way to draw me out of a film, even if I bet Refn was elated when he discovered he'd achieved the effect. Look for it when the detective nails a man to a sofa, then does a victory promenade. Or when Gosling fights the detective. He looks like a special effect. Or that mid-film gun fight? Hideous. It's like a video game. And that's without the troubling fear of women on display, but somehow that seems less offensive, because, perhaps sadly, I expect that in a film like this. 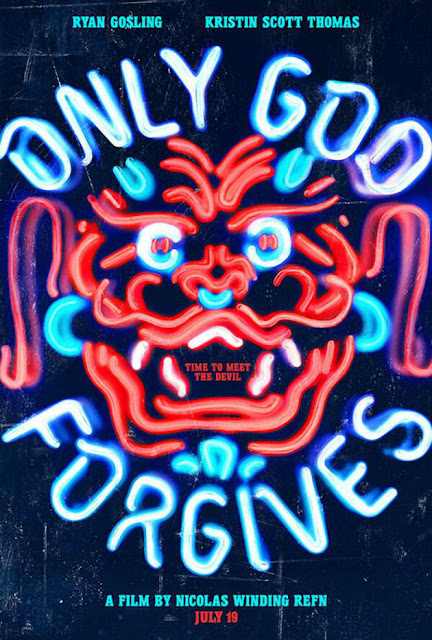 Here's why, even as I actively disliked so much about Only God Forgives, I look on it with fondness. Most films don't exist in grey areas anymore because there are no more grey areas. Talk to the right people and anything's a masterpiece, anything's a failure. Vastness of subjectivity has rendered taste-making moot. Even disasters like John Carter or Anonymous have people like me saying they're wounded masterpieces of the popular form. Nothing is ever a complete failure, unless it is (see: the works of Adam Sandler, auteur). But there's no argument there. The only argument is about shades of totality. But it appears that Only God Forgives is just too weird to be loved today. And furthermore I disagree with the good reviews. I think they're making apologies for crimes it wasn't charged with and so don't understand it any better than the haters. It quite clearly doesn't belong in this time. Years from now our kids will stumble on it and go "What the fuck was this about?" and they'll be beguiled because how could the star of The Notebook (aside: a lot of people have hammered Gosling for this performance. I disagree. This took fearlessness.) and The English Patient ever make a film with eye-gouging and the phrase "Cum Dumpster." I believe he tried when he made Bronson and Valhalla, but those were too good and interesting to work as purely underground films and furthermore he was building his confidence with each new frame. But here's he found the balance of the uncanny, the beautiful, the stupidly profane and the pointedly nonsensical. He was confident enough to fail on purpose. Nic Refn is ensuring that the future is as weird as the past was for him. If it doesn't make sense, well, good. It's for the next generation of thrill seekers to deal with. The hint is the dedication. He gave Drive to Alejandro Jodorowsky, but that was a success: he won best director at Cannes and I was sure they'd give him an Oscar nod. Can't lay that at the maker of El Topo's doorstep now can you? No, no, no. This is what you give to Jodorowsky. One more 'For Alejandro...' won't hurt his feelings, I dare say. He had to earn the man's company by making something unexplainably fucked up. A true midnight movie. Something that plays like a dare to each new audience member. And he's certainly done that. Hey, people once hated The Holy Mountain, right? Maybe one day they'll love this too. Or maybe not. (Oh hey, maybe it's a remake of Santa Sangre? ...no.) The point is I'm happy it exists and I hope films like Only God Forgives will always exist. Life would be far less interesting without them.
posted by Scøut at 7/21/2013