Scout Tafoya Larry Fessenden's first film was a Super 8 remake of Spielberg's Jaws which included a pretty accurate miniature representation of the vessel The Orca. It's half parody, half-tribute, all proof that Fessenden was someone who got the details right and has his own way of doing things. When he started making horror films they felt real, every inch of them. They were horrific long before the monster showed up because he got the details of anxiety and aggressive behavior just right. The real villain of his film Wendigo isn't the violent and nightmarish forest-dwelling spirit at all. On top of being a unique director, Larry's also a singular presence on camera and of course one of the best indie film producers who's ever lived, so naturally when he took a break from directing I was fine with it because he was using his time admirably. That said I was more than a little thrilled to hear he'd once again directed a horror film and the more I learned about it, the more it became clear that he was returning to that little homemade Jaws parody with a bigger budget and a real monster. And that would have been enough, but Fess' is too interesting a filmmaker to leave it at that. 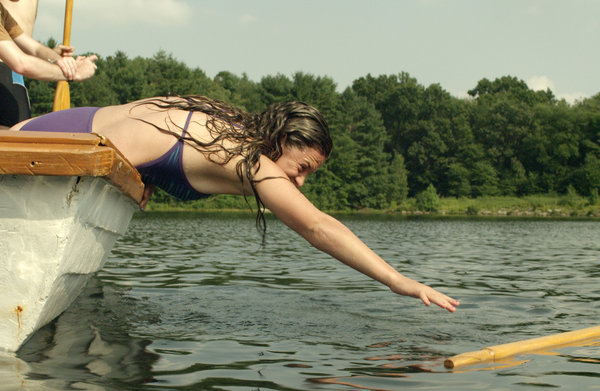 The joys of his latest, Beneath, are tactile. You can see the monster and the characters really touch it. That was a satisfaction I thought long gone from mainstream horror: CGI means you can have any creature you can dream up attacking your characters, you just can't prove it's there. If all this film's budget went into the mutant in the lake, then it was money well spent. But that sense of reality, of being able to reach out and put your hand on everything is also in the character design. At the start these people are shades away from cardboard cutouts (this is on purpose) but as soon as the first victim's blood fills the boat, they become real people with wicked survival instincts. If getting off the boat means everyone else has to die, then that's how they're going to play it. But it takes goading before the characters who seem primed to be the 'villain' take matters into their own hands. And characters who seemed fated to be heroic slowly prove they're less than meets the eye. It's a sort of slow-burner waiting to see who's going to snap and do something out of self-preservation. Their dialogue also has that weird, half-improvised feel of nervous people trying to seem imposing. It's just weird enough to be totally believable. And of course the film's best joke is that the characters can see the shore the whole time and the monster is kind of cute if you look at it the right way. They're only trapped because they keep damning themselves. I loved its old fashioned approach to the monster and loved the completely contemporary approach to the human dynamic.  What'd you make of it? Did you want them all dead or were you rooting for someone to make it back to shore?

Lucas Mangum  I'm glad you brought up character. I liked the issues the characters had with each other because it definitely helped make the film so much more than just a mere monster movie. Fessenden showed real competence by not limiting the conflict to two or three characters. Each person has some kind of secret beef with the other people on the boat and the tension escalates perfectly. I'd say it demands patience from the viewer, but the fact that they were also being attacked by a monster kept things moving right along for those of us with short attention spans. And what a monster it was! I got really excited the first time it appeared on screen. It definitely conjured that enthusiasm I had as a ten-year-old seeing the shark in Jaws for the first time, or the squid in Disney's 20,000 Leagues.  Did you have any issues with the film?

Scout  Well, in hindsight they don't seem like issues and seem more like purposely thorny edges. For instance, the fact that the female character who we spend the most time with has slept with everyone on the boat (with one exception) would seem like misogyny, but it's clearly Fessenden turning up the cliches to 11. What got me in the end was the way the film treats her character in the final act - without spoiling anything, I was disappointed, even if it was essential to sort out the fate of another character. I guess my concern was whether there was a way to get to the ending he wanted without taking the approach he did (I apologize for the maddening vagueries, but I do want viewers going in with a clean slate). The treatment of women isn't misogyny so much as a general misanthropy, which while perhaps purposely directed at a generation that won't have been old enough to have made the mistakes they're accused of making, it works because of the parodic look at the genre, but also because there are so many ways for people to be vicious these days. One thing Fessenden rightly acknowledges is that everything gets filmed these days, whether through cameras or cell phones, which means no one can hide their behavior anymore. The lake serves as a nifty little metaphor for their forced exposure to each other. They have nowhere to swim to - they're stuck with the truth and the people it pits against them. Beyond that I suppose I couldn't help feeling it was a deliberately slight affair (the patient attitude of the monster drains a little tension from the precedings, even if that's probably how it'd go down - more reality hemming in on tropes). Wendigo, Habit and Last Winter have real gravity to them that this wants. Perhaps it's the character sketching but it's hard to bet on anyone because they keep infuriating each other. I liked them all, which is rare, but didn't love anyone so my stake in the ending was minimized. But of course there's so much to latch onto here (it strikes me as a most European approach to horror writing) that it hardly matters that there could have been a little more. Next to Maniac, The ABCs of Death and American Mary this still emerges as among the most thoughtful genre films of the year and certainly among the best American horror films for quite awhile. As with Fessenden's other films, Beneath was certainly made with care. 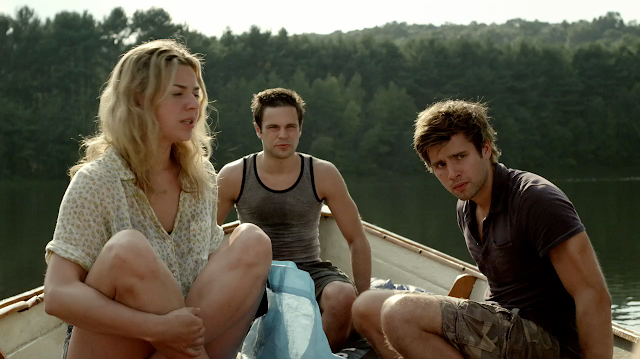 Lucas  All excellent points. My gripes: I felt like the Johnny character was handled poorly. We were led several different ways on what his fate would be, and without giving away too much, the way he ended up wasn't what I expected. Not in the 'pleasantly surprised' way either, more along the lines of feeling lied to by the screenplay. Also, I am a bit burned out on, without sounding too judgmental, films where everyone is a bad person. Of course, I fully acknowledge that it served this story well, but I wanted someone to root for. Night of the Living Dead explores the same concept of people's ugliness coming out in a crisis, but we still had Ben as our character to follow and identify with. Now the tension is handled so well and the film is so damn strange (in that wonderful Cabin Fever kind of way; it actually reminded me a lot of Eli Roth's debut), it was very easy for me to look past all of that. I think, and I can't believe we're already far enough into the year to consider this, but I think Beneath is gonna be on a lot of top ten lists this year. It will almost certainly make mine.

Scout  As far as horror, yeah...this'll be on that list. No question. Even if we got ten great horror films between now and then, I'd still include it because it does so much so differently and there's too much right for me to get totally down on the few missteps. (I agree about Johnny, by the way, even if I had to admire the gumption of the script for treating his arc that way. Not satisfying, but twistedly believable, like so much of the film).

Lucas  Oh yes, I have to give it props for not being afraid to be its own thing. It doesn't fit comfortably with any of the stuff that's come out in the last 5-10 years, and in my eyes that's a triumph. I mean there are pieces here and there like it's partly a found footage film, and the characters are your naughty kids in the woods (if three-dimensional) but even so it fiercely stands out.
posted by Scøut at 7/28/2013