David Cairns and I have been digging into the films and events of the 1968 Cannes Film Fesitval, the fest who knew too much... The thing that pisses me off about the '68 Cannes Film Festival being cancelled is in part the phony piousness of the wealthiest members of the 'revolution' but more so because of the films they insisted no one see. Certainly if the slate had all been made up of the likes of Here We Go Round The Mulberry Bush, I think even Richard Lester could have been talked into protesting. That wasn't the case, as we know well. Even most of the failures were interesting (the loathesome Joanna, a kind of proto-Eat Pray Love, at least gropes around in the dark for ideology though it in no way 'gets' it) and the vast majority of the films that screened were fascinating and heartfelt, most brimming with radical political conviction. 1966-1972 were probably the most radical years of international cinema and the '68 fest could have been ground zero; it did ended up being a kind of groundhog day, predicting a few more years of hardcore socialist/marxist cinema, but the movements died down all around the art. Since that period, the lineups have been split between the political and the mainstream, but it'd be tough to think of a year that was so dogmatically bisected as 1968. Or rather it's tough to imagine another year in which Here We Go Round The Mulberry Bush was the rule one on end of the competition and Bahrudin Cengic's punishing morality tale Playing Soldiers was representative on the other. 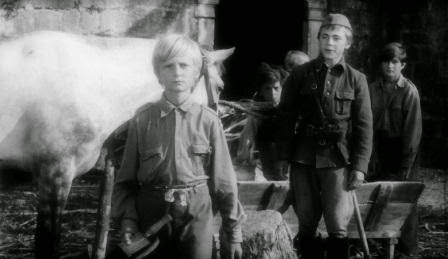 A young blonde boy rides a train to an orphanage full of Serbian soldiers (the subtitles made it a little tough for me to be sure of their ethnicity but that made sense to me) heading back from the front. World War 2 is still raging and as soon as he gets off the train he's going to be confronted with the mirror image of this gang of embittered, battle-weary men. He's being sent to an orphanage, his parents having recently exited his life. The catch: the orphanage is for the children of soldiers killed by the Nazis and he's a German. If the other boys knew of his parentage, they'd dispatch him with the same ruthlessness with which they murder a German Shepherd the minute the boy gets off the train. If they'd kill a dog for having the word "German" in its breed, imagine what they'd do to the child of party members? The man who runs the orphanage knows the boy's secret and has agreed to take him in anyway and hide this little fact from the other kids. He's the only person we meet who seems entirely good-hearted. Naturally he gets his faith in the innocence of children shaken and his partner is punished for good measure. All things considered the Lord of the Flies kids (the one point of comparison everyone makes) seem less evil because their beliefs are deliberately a little abstract. Playing Soldiers' politics are real and the story leaves quite a mark. The film is ultimately a humanist tract, it just comes by its conviction in the most painful way imaginable. 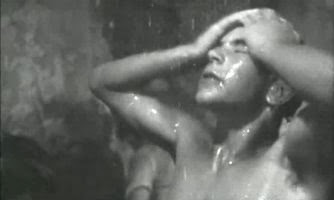 Playing Soldiers is in synch with Lord of the Flies in more than a few ways. Peter Brook and Cengic were both fans of murky black and white photography which acts as a kind of haze in which people become shades; where actions and their consequences are muddled. Water imagery gets used in both; there's a sexual assault in a shower room that could hardly be more terrifying, and shots of the boys emerging from a muddy pool puts one in mind of the denizens of Elias Merhige's Begotten emerging like the first men from primordial slop. I like the film as a precursor to Guillermo Del Toro's The Devil's Backbone, another unremittingly bleak boys' own adventure story. Shockingly, Del Toro has more faith in the decency of children than Cengic; things get bad in Devil's, but never quite as bad as they get here. Del Toro makes his distinction between the acts of children and adults separate enough to allow camaraderie across class and politics. Greed and childhood are the real enemy, though Franco doesn't exactly walk away unscathed. Cengic's after the idea of inherited ideology and pursues it in a way that never feels fictitious. The orphans of the committed must become committed themselves absent their parents guidance - they're all political muscle though they don't quite grasp what it is they're upset about. They've turned their anger at losing their parents into anger at the Nazis, a sly trick from our director. The first appearance of a chalk mark swastika has the same gut-knotting effect as the titular 'M' on Peter Lorre's shoulder or Janet Leigh's Ford custom 300 refusing to sink into the swamp behind the Bates Motel. It fucks with our sympathy. We cringe when we see the swastika, not because of what it means to us, but because it means the kids have turned on our young hero and his days are officially numbered. He's turned the Hitler youth paradigm inside out and its no less frightening to see kids trying to murder a young German who has no more real affiliation with the Nazi party than they do. A child with a gun aiming it another child will always disturb. Even today, in a ruddy awful print with functional-at-best subtitles, this was one of the more harrowing films I've ever seen. And it was never given the chance that the work of veterans Truffaut and Godard in past years because they'd fought so hard to close down screens.
posted by Scøut at 11/28/2013