The '68 Comeback Special: Here We Go Round The Mulberry Bush

Here it is. The worst film of the '68 Cannes Film Festival. David Cairns, gallantly undertaking the challenge with me, knew this day would come. Wisely, he challenged me to a game of logic in order to see which of us would have to review it. Naturally I accepted and on the day some men in a van pulled up and threw a canvas bag over my head. They drove me around the Bucks County area for several hours blasting Neil Diamond at a deafening volume until I relented and agreed that anything would be better than that. What I failed to see was that the real test David had set for me was not to show up at all. Clever bastard. He always has the endgame in sight. So with a heavy heart, I returned once more to Clive Donner's Here We Go Round The Mulberry Bush. 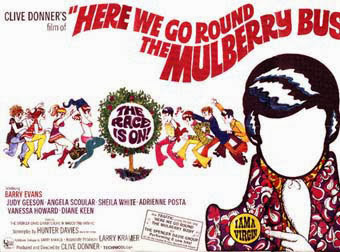 To the strains of one of the very worst movie theme songs (an already ignominious category) ever composed, by "Stevie Winwood and Traffic" a boy rides around on a bike, but he's quickly replaced with poorly solarized scenes of grabbed asses and skin and horrid fabric rubbing against one another like blind rhinoceros. Stevie would become Steve as a way to distance himself from the crime he helped commit.  Clive Donner wasn't so lucky. He had his name on a proto-Director's Guild roster, preventing him from making pictures in Chile under the assumed name Carlos Tegulchipec-Whizzington. He tried but they stopped him at the airport and sent him home to think about what he'd done. He tried again three hours later and they handcuffed him to a radiator. Not his radiator, mind you. This is all information I've culled from the very helpful, entirely fictitious making-of book Don't Carry On, Clive by Ted Rumsfjord, former columnist for the Lancashire Nooner until his dismissal for having written the book and thus having something, anything to do with the movie Here We Go Round The Mulberry Bush. Everyone who came near it suffered or had to do backflips to avoid suffering. As it should be. The film is ghastly, a candy-coloured rubbing of our collective nose in the sticky awful of England's rampaging teenaged id. It's no less horrible an experience than sleeping in a porn-happy 16 year old's bed after he's been instructed not to change his sheets for eight months. You there yet? It's like sitting in a girl's dorm toilet, unable to move or speak, while listening to the sound of the boy's dorm on headphones. I could go on. It's a film that feels like the Dorian Gray of the Swinging Sixties London. Every face looks like battered fish before it touches the scalding hot oil that will render it delicious. Every song has none of the edgy beauty brought by wonderful cads like Jimmy Page, David Gilmour or Keith Moon. The Spencer Davis Group is not The Yardbirds. They aren't even The Strawberry Alarm Clock. And Here We Go Round The Mulberry Bush is no The Knack...and How To Get It.


From chapter 4, Rumsfjord writes: On set Donner receives script pages from a messenger boy on a bike. The boy doffs his cap revealing two glowing horns. The boy's laughter as he rides off, an echoing husk far deeper than the boy's years suggest him capable of, will haunt Donner anytime the producer suggests an extra bottom make it into the shot. Donner reads the pages during a lunch of Gin & Vermouth. Star Barry Evans knocks on the door. Some of the locals had learned what they were up to and chased him up a tree like a cat. Director of Photography Alex Thomson is dispatched to bring him down. Evans would like it greatly if they moved to a safer location. No good, replies Donner, as they've recieved threatening letters from every town for miles. The people of Battersea sent a very vicious missive threatening to sacrifice Vanessa Howard by encasing her in bronze. Just the same Evans insists on changing hotel rooms every night under different names and won't leave Donner's trailer until he agrees. Shooting commences. Production Manager Basil Keys is revealed to be Andreas Baader in disguise and the police are called, but he's gone before they arrive. There's a scuffle when Mike Sarne and his crew ride through town on their way to film Joanna. Donner and Sarne taunt each other from across the town square. The art directors of both films begin throwing punches. Evans hears of the fight  and the budget increases as he demands a series of fake mustaches to be brought to his hotel room every morning for his selection. 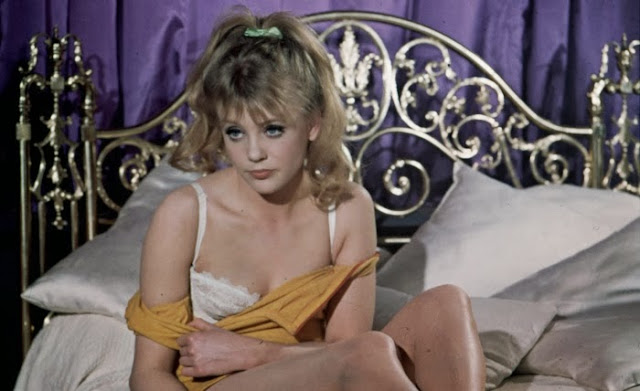 "Screenplay by Hunter Davies, from his novel." What hubris! What gall! He just came right out and took credit for it like it was no big deal! When the authorities came to his door following the London premiere he'd fled to Denmark in a baker's truck. When the truckdriver discovered him, he forced Davies to sit in the dough and be baked along with the bread like Cornel Wilde's benefactor in The Naked Prey. He survived, just barely. He still lives and breathes and puts pen to paper while Dickens, Fitzgerald and Westlake lay dead in the ground, unable to write another word. No less an authority of stuff than John Lennon took a break from shooting rapidfire Heroin and being an asshole to slag off Davies work. One of the first things we hear main person (words like 'actor', 'hero', 'protagonist' just don't seem right under the circumstances) say is "Knickers! I'm knicker-obsessed!" Projectionists across the United Kingdom begin kicking their instruments when they hear that phrase but alas some prints remain intact and play to the end. If you're watching at home in the present and haven't fled to the next room to call your sponsor, you've fixed yourself a tall drink. Whether or not you choose to watch the remaining 90 minutes is a question you and whiskey need to seriously ponder. I went ahead. After several minutes of Barry Evans riding around on his bicycle pontificating like a horrible fucker, I wondered if the whole film took place here on a basketed-tenspeed not unlike that Speed-themed episode of Father Ted. Alas. He gets off the bike and starts hitting on women, real and imagined. I wish desperately a bus had hospitalized him and the rest of the film was in his unconscious, sort of like The Singing Detective. Ha! HAH! Fate laughs in my face as they parade one warmed over type after another, including poor Denholm Elliott (Like Donner, he's long deceased. Coincidence? Who can say...), Judy Geeson, and Adrienne Posta as a cockney version of Nicole 'Snooki' Polizzi from The Jersey Shore. If you're not terrified, you're not paying attention. People lived in fear for years that they'd enter a cinema and the reels would have been switched at random by members of the Red Army Faction and they'd have to watch even the opening seconds of this dire sex farce. The word 'farce' obviously implies that all the door slamming and creeping around in a big house trying to place the right dick in the correct hole during one of the film's many lowpoints is successful. It isn't. You should be deeply ashamed if you thought it was. 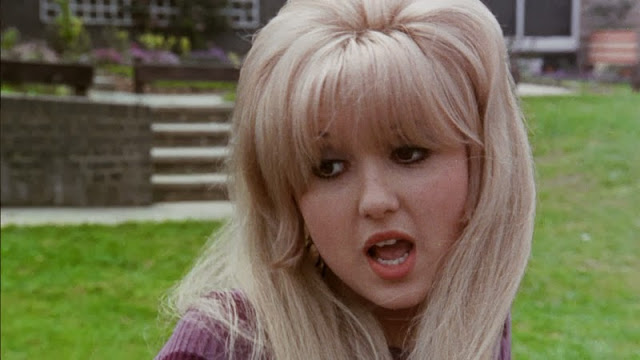 I could continue, give you a play by play of every horrid looking thing Evans eats, every woman who refuses to sleep with him, accompanied by constipated reaction shots and sad trombone, I could trot out the much contested Clive Donner is Hitler argument favoured by many. Clive Donner wasn't Hitler. Of course not. That would be ridiculous. There's proof he could point to but he still felt the need to make a film about how great and heroic a job killing The Fuhrer was just so that during the junket no one could look at the director and say "This film must have been difficult to make, what with you're BEING...Oh, I see...but explain Here We Go Round The Mulberry Bush?" He must have heard those words six or seven dozen times throughout the 70s. Mobs of reformed Teddy Boys used to chase him around Salford, newly galvanized into picking up their old hooligan ways by the film, taunting him while waving sharpened canes and umbrellas. "Fink you can get away wivvat Richard Lester pastiche? We'll show you!" I could go on and on and on and on and on...but it's Christmas. Or rather, Boxing Day. So let's take a different path, shall we readers? Let's remember that cinema is a gift, a magical, mystical enchantment capable of curing every malady from a frown to disease (I am legally compelled to point out, yet again, that I'm not a doctor) and just because we're given coal shaped like Mulberry Bush doesn't mean we can't overcome, like the Whos of Whoville. I do think Donner deserves to be remembered for better things. That Hitler movie? It's called Rogue Male and it's really rather good. It's got Peter O'Toole, a performance to be prized in a movie that does deserve it. Lord know he often settled for less but Donner earned the right to put my favourite actor in his film.  So this Boxing Day, don't remember that time your one aunt got so drink she got herself uninvited from future gatherings, remember when you thought everything in the world was under the Christmas tree, including the scripts for those George C. Scott-Dickens adaptations. We take the good with the bad and forget about Vampira, The Nude Bomb, Charlie Chan and the Curse of the Dragon Queen and instead remember that we kinda laughed at What's New Pussycat? Didn't we? Merry Christmas and Box bless us everyone.
posted by Scøut at 12/26/2013

It's truly horrid. This was where "Swinging London" veers off into "The Creeping Terror." I always Smashing Time is the ne plus ultra of this sort of grotesquerie, but "HWGRTMB" has it beat by a mile as (unlike Smashing Time) it's in no way enjoyable.

There really is no joy whatsoever to be had. That's perhaps the most perverse thing about its failure: it's a film about how madcap a time is being had by its horny protagonist that in no way attempts to give any sort of mirth or even so much as a passing feeling of not wanting to be murdered to its audience. Its reasoning seems to be that because Barry Evans can't get laid, everyone else should be subjected to earsplitting ennui from the very depths of human misery until we cry uncle or until the lead is deflowered. No one wins.

Seriously, this review is so outlandish it almost makes me want to see the damn thing. Mind you, my tolerance for this sort of nonsense is pretty high: I believe in the existence of 'good' Carry On films, and count Up Pompeii as one of my favourite British comedies, up there with Withnail and Kind Hearts and Coronets.

I wonder if Mulberry can be considered as some kind of transitional British film between the cheeky flash of the mid-60s and the dingy sex 'romps' that cluttered up the 1970s.

It's the precursor of those dingy 70's sex "romps."

"Seriously, this review is so outlandish it almost makes me want to see the damn thing" That's very kind, thank you terribly! Too kind, in fact, for me to encourage you to watch it. Please, keep your happiness and watch The Atlas Shrugged movies or the Ilsa Sequels instead. That's trash you can set your watch by.