Godard rarely gives coherent interviews anymore. His films and his own statements mostly come out the same - beguiling and pointless. You wanna learn why he did anything back in the day, you're shit out of luck. He still has a lot of politique and defensive rigamarole to doll out to whatever unfortunate sod seeks him out for a word or two, but goddamned if I can figure out what drives him to edit his beautiful nonsense anymore. His movies are still totally fascinating but I also won't pretend I know what goes on or that they're 100% or even 65% successful. The unspoken subtext of his overthrowing the Cannes film festival in 1968, which David Cairns and I have been profiling film-by-film, was that he was kissing the kind of trendy stylistic, genre flaunting gymnastics he'd created goodbye. Cinema, such as it was, was now his enemy. That very year he made Un Film Comme Les Autres, which you were meant to flip a coin to determine which reel went first because the images were the same no matter which one you picked. Nobody told me this before I watched the interminable thing, and here I was looking for a story behind all the talk of revolution on the lawn of a car manufacturer. I felt uncomfortable; it felt to me like Godard and his friends were forcing workers to enter into disputes they didn't think needed fighting. The colorful excesses and russian roulette montage of Pierrot Le Fou, Bande à part and Contempt were over. Long live the new flesh and all that. Godard throwing in the towel and picking up a hammer meant a lot for cinema. The french new wave was over, for one thing, and Godard was no longer the reigning champ of cinephilia-inflected cinema. This left a gaping hole which I'm willing to bet every young director yet to be discovered wanted to fill. Philippe Garrel and Jacques Rivette stepped up to the plate and began documenting life in post-68 France with their unique voices, neither wanting to be, nor pretending to be Godard. They were honest and fanciful in new, exciting ways, finding naturalism and surrealism good company. Attemping to be Godard would have been ridiculous. Nobody told that to critic Michel Cournot. 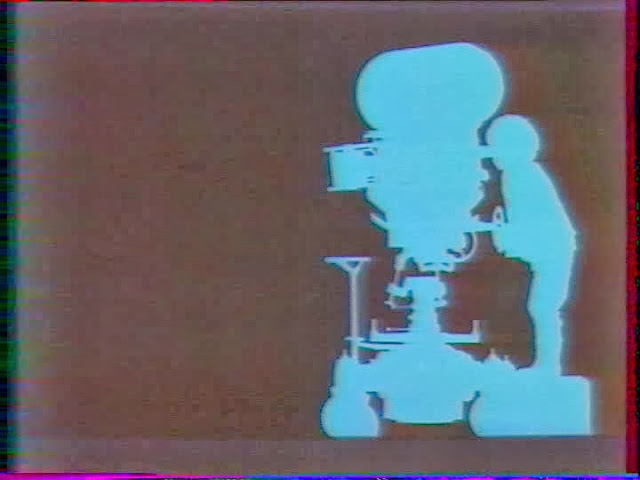 From what I've been able to divine Cournot wrote criticism throughout the 60s (Thanks to the inestimable David Ehrenstein for his correction on this matter!), but then, what important French director of that age didn't? He apparently had a beautiful voice as a writer. In '67 Godard put him in Weekend, and he liked so much of what he saw on set that he vowed to do that again sometime. To make his first and only film he snagged Annie Girardot, a young Bruno Cremer, and Jean-Pierre Kalfon, all fresh from the Jacques Brel film Bonnot's Gang, and most tellingly Anne Wiazemsky, lately Godard's girlfriend. He once more retreated to a remote countryside location with a camera crew and just like last time Godard was calling the shots. Ok, perhaps that's unfair. Les Gauloises Bleues, the resultant film, is only available in a poorly transferred TV-to-VHS-to-AVI rip and no one's taken the time to translate it into English. Cournot himself said that the script "bears the same relation to the film as a catalogue of plane parts does to a trans-Atlantic flight." Vincent Canby opined that this particular flight was missing a set of functioning wings. My remedial french isn't quite enough to help me sort out what goes on so there's a chance that the film is a completely distinct statement from Weekend and all the rest of le cinema du Godard and a profound statement about the Holocaust to boot (images of bleak railways and a few choice words on walls say he was at least gesturing in that direction).........but there's an equally good chance this is just microwaved New Wave leftovers. 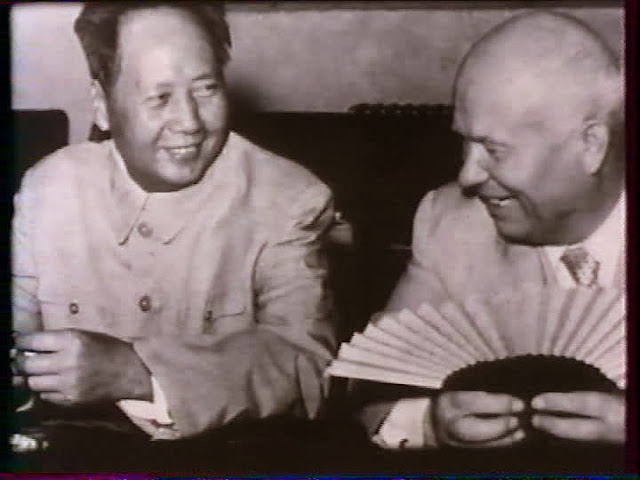 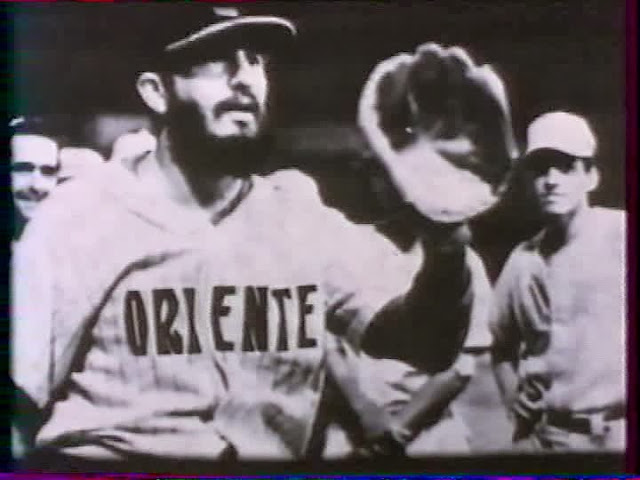 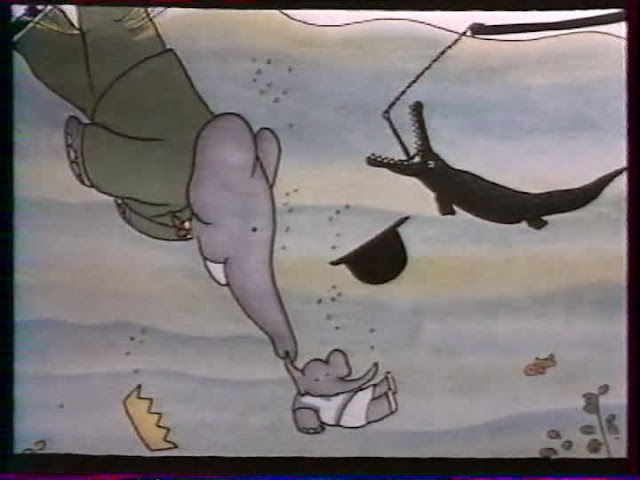 Instead of the bright primary colours of Pierrot and Weekend, Cournot shoots in muted pastels, but his model is unmistakable (even the fake blood, right out of Weekend, seems a duller shade). There are many long takes broken up by soundless inserted clarifying scenes, instead of being thrust into those scenes as we surely would in Godard's hands. There are pointless images shoved in our faces as if to provoke with their having nothing to do with each other. This doesn't really work. Putting an illustration from a Babar The Elephant book after photographs of dead bodies mostly just highlights how much better the trick's been pulled off before. Continuity is routinely flaunted, time is jumped like a velvet rope, and Cournot presents his actors and their emotions with complete irreverence. Cournot also borrows HEAVILY (ok he just fucking steals) from Antonioni's Red Desert and L'Ecclise. I don't want to write off the possibility that in missing out on whatever the plot linking this dour game of pantomimes I'm missing a masterpiece of French deconstructionism, but there just might be a reason Cournot's the one New Wave Director no one's ever heard of. I realize this entry's heavy on hypotheticals which is appropriate even if it can't be all that satisfying to read, so, my apologies. 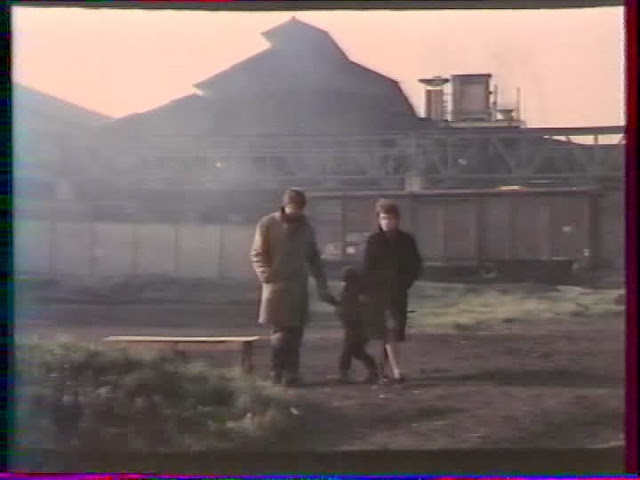 There are a few ironies at work. Godard's output lately (since 1973 really) has been mostly inscrutable or too oblique for me, but at least they come with subtitles. Les Gauloises Bleues does not because it's never made it past French TV. Why? Very probably because Godard himself (with Gauloises co-writer Claude Lelouch in tow) shut the festival down before it could play. Or maybe Lelouch knew he had co-signed a dreary bit of word-vomit and could have cared less if it ever screened. Conjecture, I know, I know, but the point is we can only point a finger at so many people and Godard's definitely got silver halide on his hands. Les Gauloises Bleues is now just as unreadable and confusing as anything Godard attempted following his post-cinema conversion. Stranger still, not only did Godard cut Cournot's directing career short, he also in essence kept making films with what looks an awful lot like Cournot's softer, still very-compelling image, and too-excitable, too-easy approach to montage. Cournot was doing his best Godard imitation in Les Gauloises Bleues, but all Godard wanted to do was make films that looked and acted like Les Gauloises Bleues. Over and over again. Words, irreverent presentation of people, contempt for coherence and an elastic sense of time, place and genre. It's tempting to think of Gauloises as the missing link between late narrative work like La Chinoise & Weekend and conversational theorems like Un Film Comme Les Autres & Le Gai Savoir (it's not a million miles away from One PM or Tout Va Bien either). 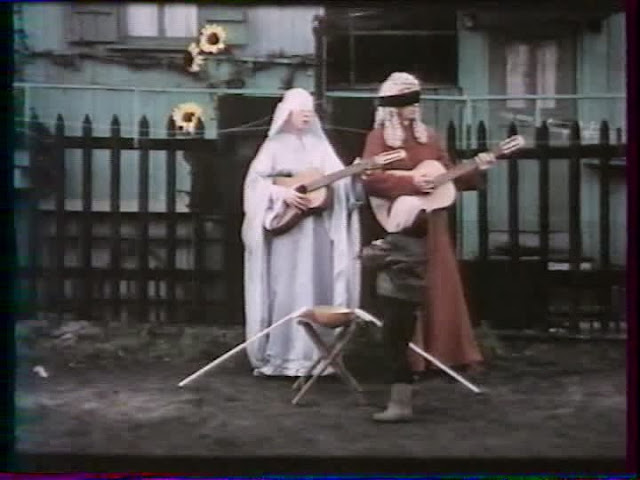 There isn't an awful lot that I can say beyond my half-guesses and hypothesizing except to say that even denied his words Bruno Cremer is a commanding screen presence. He's one of my favourite actors and he does great work just existing in that anguished, angry way he does. I detect him doing a dry-run for his tough-parent act in Un Jeu Brutal. And there's something everyone can appreciate nestled in here: a mesmerizing score by Krzysztof Penderecki. Penderecki could also be heard amplifying the weird in Je T'aime Je t'aime across the coissette, which weirdly this also kinda resembles. If the film works for me at all, it's his doing. He ignites Cournot's best images and makes you forget they've been cribbed. Those moments, when the image and music work together in a haunting harmony, almost make you wish he'd tried again.
posted by Scøut at 12/12/2013

"Gauloise Bleu" were Godard's favorite cigarette. Unbelievably noxious and stinky. He's since switched to little cigars -- which are an improvement.

Cournot wrote for "Positif" -- the anti-"Cahiers"

Godard's films in the 70's were piss poor, but his TV work, particularly France/Tour/Detour/Deux Enfants is spectacular. Truffaut LOATHED it because Godard asked children the same questions as he asked adults. He can be sentimental about women, but not children.

His recent films are spectacularly lovely, particularly Film Socialisme But you're quite right that Rivette and Garrel inherited the zeitgeist.

Chistophe Honore has it today.

Honore is a subject of further study for me. Thanks very much for the fill-in! Cournot was deeper in the man's shadow than I thought.

I love that Truffaut took against France/ but he didn't need an excuse to be pissed at Godard by then.

I like Film Socialisme a lot. I get the title as it relates to the image, but there's still a VERY large part of that film I don't think I'll ever manage to parse out. Notre Musique was similarly lovely, but I've got questions aplenty.

Truffaut was pissed because Godard said he'd cast Jackie Bisstt in La Nuit Americaine in order to hit on her. Well Jackie's a superb actress as well as Fabulous Babe, and if Truffaut made a pass I wouldn't put it past him. Or blame him. No question Godard did the same with his non-Karina leading ladies.

The place to start with Honore is Les Chansons d'amour.
Here's he last scene, whose last line is my favorite in the entire history of the cinema

That is a LOT to take in. Fabulous and decadent and full of a particular aching. Can't wait to put it in context.