True Detective: Who Goes There

The latest on HBO's True Detective from Tucker 'Fox' Johnson

Typically when I write these articles I’m actually writing while watching. This week however, I went into “Who Goes There” with my laptop firmly closed on my coffee table. I have my coworkers to blame or maybe thank for the focus I put into watching episode four of True Detective. Watching any show these days results in having to run the spoiler gauntlet the day after. Luckily for me only two people who I actually see on a daily basis pay attention to this series and both of them had nothing but dropped jaws as takeaways from the episode they’d seen the night before. This is always a good sign. Especially when entering an episode that has to pick up with the freeze frame ending that concluded “The Locked Room” and has thoroughly haunted my nightmares for the last two weeks. 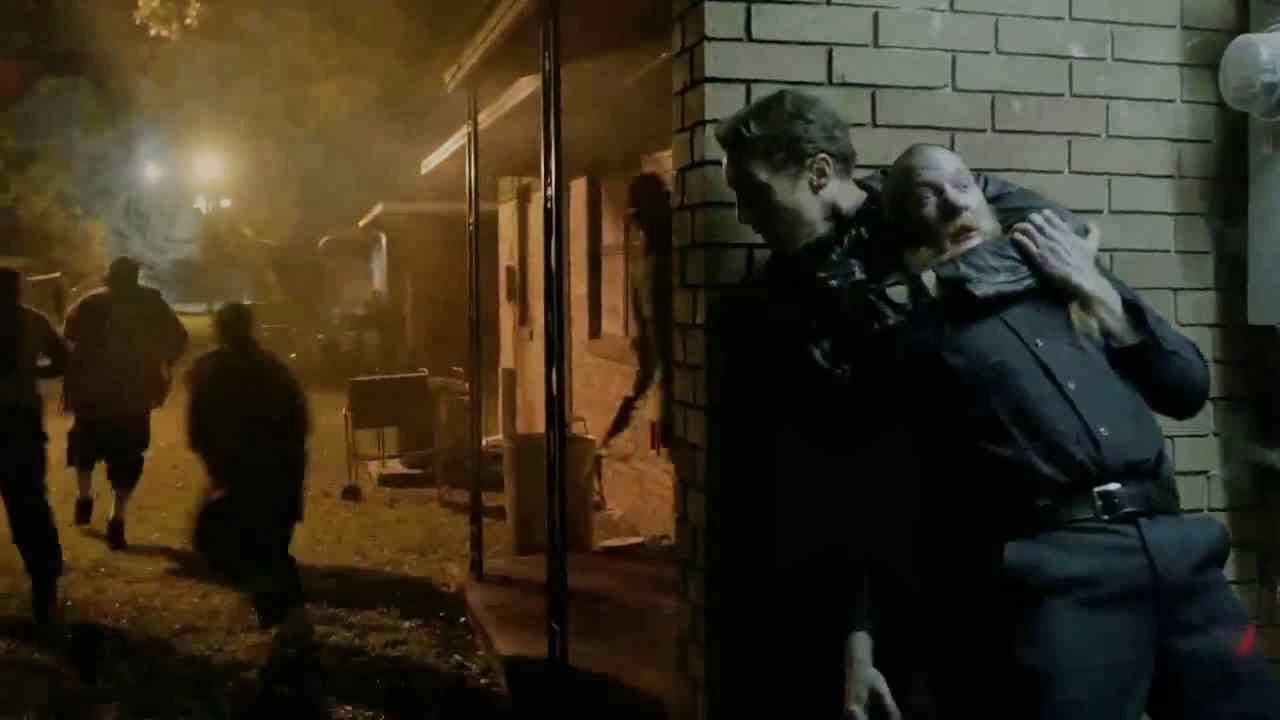 “Who Goes There” is uncompromising. Not one thing happens in this hour of television that could be considered positive. But what occurs between the lines in this outing is a completely different story. Rust and Marty begin to find common ground with one another but at the same time the lines between them and the men they’re chasing begin to blur. The episode opens with the two interrogating a prisoner in a holding cell. The scene unfolds in the expected ways though by the end Marty is sitting next to the prisoner staring across the room at Rust while they discuss how having someone around constantly spouting crazy gibberish is enough to drive any man to bad behavior. It's a joke but the blocking pushes it into the realm of the serious and with some simple positioning we begin an episode that really starts to peel back the layers on Rust and Marty’s relationship, in a way that is rarely seen on TV. When Marty’s wife leaves him he’s distraught. So much so that he confronts her at the hospital where she works and has no problem making a scene in an attempt to win her back. Rust intervenes and takes Marty to a bar to cool off. And this is where the curve ball comes. Instead of learning something new about Rust as he opens up to Marty about a similar experience he once had we get Rust shutting Marty down. Marty wants nothing more than the wallow in his lost love and Rust will hear none of it. Instead he pushes focus to the task at hand: catching the star of last week's freeze frame Reggie Ledoux.

Film and television are great arenas for obsession. Both mediums allow for it to mount within a character’s mind and consume their lives in a matter of a few hours or even minutes. True Detective doesn’t slouch when it faces obsession. Its depiction is the clearest I think I’ve ever seen. Rust is obsessed. But not with catching Ledoux or even being a cop. He’s obsessed with confirming all the pessimism about humanity he’s been rattling off since the outset. He goes off the reservation about as quickly as anyone could with the idea of resuming his undercover behavior that’s really only been hinted at so far. He’s excited when he sits there injecting cayenne pepper and ink into his arm to simulate tract marks. Playing a part and escaping himself, even if into the role of a violent junkie persona, is enticing to Rust. It becomes a fix for him. And it became a fix for me too. Throughout film school I was constantly told by professors to show, not tell. Film is a visual medium so take advantage of it. Well we get that here. Rust’s little box of toys is a goosebump-inspiring way of learning about his past. Automatic weapons and liquor aren’t anything out of the ordinary on television but here they echo loudly and proudly from this character’s past and I want to know every tiny detail. But writer/creator Nic Pizzolatto doesn’t falter. He stays true to his plan for telling the story of these two men and never gives you any more about them than he deems necessary.

Aside from the Rust’s obsession we see another kind of mania and that comes in the form of these two men’s passions for their jobs. By the forty-minute mark Rust and Marty are completely over each other. But they put their personal problems aside for the good of their partnership. This kind of relationship rings so true to me and it's unique to the medium. Like so much else in this series, it's refreshing.

And speaking of, “Who Goes There” provides something completely new to the series: Action. But it's not at all what we’ve been conditioned to expect. After both Marty and Rust chastise their interviewers for never having been in a real gun fight I went into this episode thinking I was about to see a protracted fire fight between two cops and their suspect. I couldn’t have been more wrong. Instead of a quickly cut, shaky cam shootout we got something much more interesting. A six-minute unbroken tracking shot following Rust as he enters a stash house, winds up on the wrong side of an already bad situation and has to make his way out of a neighborhood, the entire population of which is closing in around him. The sequence sustains a tension rarely seen on procedural television and it does so even while surrounding Rust with the chaos he keeps talking about. Series cinematographer Adam Arkapaw, who also shot the fabulous Top of the Lake, works magic augmenting Cary Fukunaga’s direction. Together they managed to block an incredibly complex sequence that keeps Rust as close to the lens as possible. Because of this, we’re actually a step behind the detective. He’s seeing threats even before we are and when the camera finally allows us to see what he’s already dealing with our brains furiously try to catch up. It’s a great way to make a sequence that much more tense for an audience who had no idea what they were getting themselves into.

The majority of water cooler chit chat about “Who Goes There” will revolve around the tracking shot in the concluding minutes of the episode. And with good reason. But it should do nothing to lessen how powerful the new information we learn about Rust is. He’s rapidly become the most interesting man on television. I just pray the ends justifies the means.
posted by Scøut at 2/17/2014