Will Review Films For Food

A little girl interacting with a deer would make all the sense in the world on a calendar or a hallmark card or, more to the point, a storybook, which is why the image is used ironically in two new cinematic fairy tales. They're shorthand to let you know that things aren't as they should be. In Hanna, a disorienting, unsuccessful actioner from England's Oscar-bait king Joe Wright (Atonement, The Soloist), it's meant to establish the fable's heroine and her unconventional relationship to the world. In The Sleeping Beauty, the latest bedtime story from unflinching arthouse provocateur Catherine Breillat (Fat Girl, Sex is Comedy) it's meant to illustrate the strange powers and journey of the princess at the heart of the story. The image not only works as shorthand for the kind of stories being told but also for the hand of each director. Wright bludgeons the viewer with assaultive and embarrassingly earnest images, taking the deer as his first victim; Breillat deftly blends it into the texture of the dream world she's created, a world in which you've already either become absorbed or remain outside by the time the princess mounts the creature and rides it across the tundra in search of her next task. The movies are both hit or miss propositions, worlds so totally and esoterically designed that there is no mistaking them for reality, but only one of them intended to be pure fantasy. 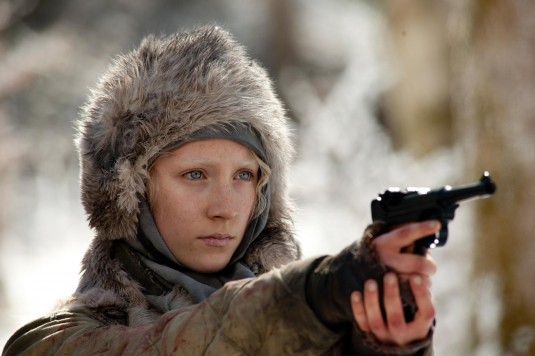 The title character in Wright's spy film is a 14 year old girl (Soairse Ronan) raised to be the ultimate killing machine by her father (Eric Bana), an American ex-pat who speaks in an inexplicable German accent. Living alone in the woods with her dad since her shadowy birth and the equally shadowy death of her mother she has learned how to detect villains even while asleep, use firearms & kill, clean and skin animals. She's Jason Bourne in the body of an "adorable" moppet, but the only thing Ronan makes us believe about the character is that she's trying really hard to seem 'foreign'. We're told that her father has trained her for every possible situation that might confront her back in the real world but he's apparently left out electricity, television, running water and how annoying English tourists can be because she's bowled over by each of these things and more while evading capture by a glowering Cate Blanchett who wishes to reclaim Hanna for the CIA. Her clumsy integration into modern life is deeply at odds with her killer instinct; you don't believe her as being capable of sneaking in and out of maximum security underground bunkers because she goes out of her way to engage in Jerry Lewis-esque clumsiness once she gets free, reacting to the world like a baboon confronted with its own image. I suspect Wright was far too busy spinning his camera and planning arrogant virtuoso tracking shots to notice that his script made no sense. So thanks to his screaming technique and his wish to make every character, situation and object seem as alien as possible, not only does the film fail to make sense but there is no continuity within the context of the story or even within any given scene. The only thing that does work is the score by the Chemical Brothers, who join Daft Punk in the ranks of musicians who've bested the films they've scored.

Meanwhile in a pocket of tiny theatres, another bedtime story plays to smaller crowds. The Sleeping Beauty is the latest from Catherine Breillat who, after taking her brand of harsh emotional exploration to its logical end in 2004's Anatomy of Hell and then suffering a stroke shortly after, reinvented herself as a teller of beautiful, historical bedtime stories. 2007's near-perfect The Last Mistress led to 2009's cute-and-twisted Bluebeard and finally to The Sleeping Beauty, a movie equal parts dream and road movie. Those familiar with the Charles Perrault story or the Disney movie know the outline but can't predict the form it takes in Breillat's modernist mold. After being cursed to die a premature death but having her sentence commuted to a long and deep sleep, princess Anastasia enters a dream world full of trolls and gypsies that leads ultimately to reality and fantasy mixing in service of discovering what it means to be worshipped and then forgotten. What starts as a parable about a girl coming of age becomes a very real examination of gender roles and male expectation. The layers of fantasy are slowly peeled away until we find ourselves looking at two kids in 21st century France trying to figure out how they can learn from an age-old story. The same problem exists in Hanna; fairy tales don't work when you bring them into the real world, no matter how much style you employ. Breillat uses costumes and natural wonders to craft a place you can recognize but not something you can confuse for Anastasia's waking life. Wright wants to blend them and fails because he has nothing to say, and even with ten times the budget can't find anything as striking or haunting as Anastasia riding her doe under the Aurora Borealis. It's a timeless image and, like the tale it reinterprets, is bigger than one telling. In Wright's movie, our heroine learns a lesson that can't be taught in good conscious: kill everyone or be killed. To ask "why" is anathema to the Hanna. To ask the same in Breillat's film yields endless possibilities. It's a rich text that I'm pleased to say I don't fully understand. "I don't want to kill you, but I'm itching to" says the gypsy princess to Anastasia in The Sleeping Beauty. At no point does anyone ask why Hanna must be set loose to kill. I'd take quizzical restraint over flashy id and generic convention any day. Put simply: a deer is more beautiful alive than dead.
posted by Scøut at 6/28/2011 No comments: 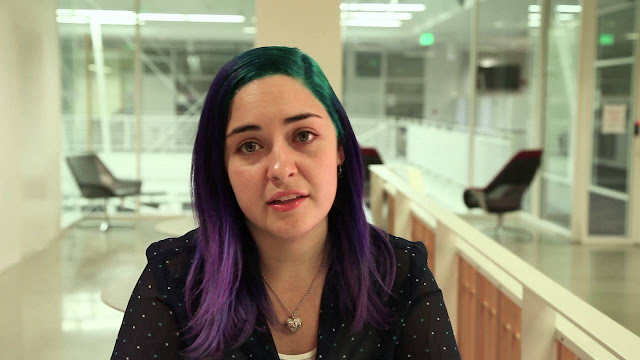 Born in Tampa Bay Florida (April 17, 1990), educated at Boston University, Monica Castillo's best known (and most deeply felt) writing springs from the well of her Cuban heritage. In many pieces she speaks beautifully of what it means to be the child of first generation immigrants, and how that informs even the smallest considerations in her consumption of translation of media. She began her career writing for Boston film outlets after a chance encounter with criticism led her to abandon her major in favor of engaging with film full-time. She quickly found herself in many smaller and unconventional outlets before graduating to the likes of the Village Voice and RogerEbert.com. She was the recipient of the first ever Film Critic Fellowship at USC which led to her landing a job at the New York Times. She has since moved on to become one of RogerEbert.com's regular reviewers and still fields for many outlets for festival coverage and other major media events. She is  easily identified at festivals and aceeenings by her hair, which is frequently dyed an gorgeous neon shade of some kind or other. She’s been an important voice as Latina voices have become more prominent in media criticism, her successes an important sign that the landscape will not be expected to catch up with minority voices. She has proven that non-white, non-male film critics will take the space they deserve and make the discourse more interesting and varied whether it’s ready or not.

On Soy Cuba:
I am Cuba (Soy Cuba) is a lovely composed postcard of various old Cuban landmarks: the nightclubs, rural countryside and city life. It captures Cuba’s haves and have nots in a period of transition, close to the start of Castro’s regime. But I always feel the director’s outsider point of view when watching Soy Cuba. The way the camera gawks at people is a compositional choice that doesn’t make me feel that I’m among my people. It makes me feel like I’m watching someone else’s culture, not my own. Its distancing lens is an artful landmark, but not one I’ve felt emotionally attached to. This wasn’t how my family saw Cuba.

On visiting Cuba for the Havana Film Festival:
"I left, why do you want to go back?" she asked me.
My mom and abuela reluctantly helped arrange my trip to stay with my great uncle, one of the few Cuban members of my family I knew in person rather then in pictures. Less than two months before my trip, he passed away. I felt guilty for not having gone sooner. My aunt took me in, and my cousin offered to help me navigate the city without a map or Wi-Fi, and hell, sometimes no electricity (apagones, or blackouts, have become so routine it's normal to carry a flashlight at all times). Several family members passed on tips on what not to eat to skirt food poisoning, to live soaked in mosquito repellent to ward off Dengue Fever, and which cabs were more likely to swindle visitors.  But all the stress, worry and sadness melted away the moment I woke up on the plane over the luscious green campo (countryside) dotted by the occasional tin-roofed farm. When we landed at the Jose Martí airport, the plane erupted in applause with some feet-stomping and sniffles. A woman behind me burst into tears, saying it had been decades since she'd seen her island. It was my first time, but I resolved to keep my face straight as I headed into the airport to have my bags searched.

On Embrace of the Serpent:
Newly Oscar-nominated “Embrace of the Serpent” is a black-and-white fever dream about the cruelty of colonialism against the Amazon’s indigenous tribes. Shaman Karamakate (played at different ages by Nilbio Torres & Antonio Bolivar) is asked to help white scientists searching for a rare plant at different stages of his life, and their travels takes them past heartless rubber barons (notably never shown onscreen), abusive priests and cannibal cults. However, it is the heated arguments between the scientists and Karamakate that elevate the movie. Their encounters allow for the exploration of the effects of colonialism, stumbling onto one horrific historical chapter after another. Karamakate is separated from his tribe, indoctrinated by Spanish priests, but escapes to reaffirm his culture in defiance of invaders. Manduca (Yauenku Migue), an assistant to one of the scientists, is a freed slave from rubber barons who routinely beat and maim natives. Much of the dialogue doubles as a testament of the latent and overt racism that robbed tribes of their culture, even indicting the patronizing tone the scientists would sometimes use with indigenous characters. The black-and-white photography is stunning, making the rivers an ominous inky black color, and swapping the luscious jungle greens for shades of grey.
posted by Scøut at 6/16/2011 No comments: