There is one piece of music and film that shines above all others of the type. It transcends time, trends, and taste. Fans of film and music will know exactly what I'm talking about and will be unsurprised to hear me say that it is one of the greatest achievements by any artist. 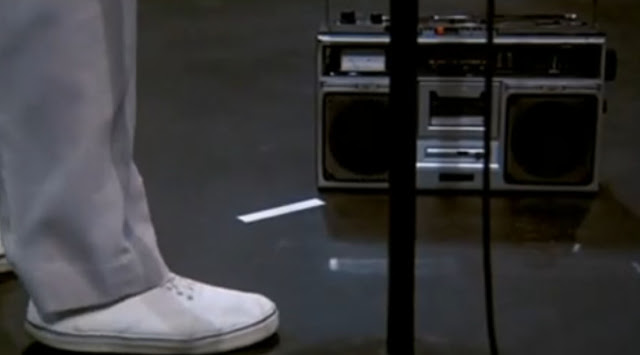 Now this defies easy classification and so cannot fall under many of my series headings. It is a documentary/performance and so cannot fit in with my 100 favorite fiction films. It is a live performance and so cannot be grouped with studio albums. It is not unknown and so I can't claim to be doing anyone a service by harping on it's genius here on this lonely website. It isn't under-rated, per se, but it's genius on a level that maybe seven people in a given generation will achieve. I'll frame this little opinion piece with some perspective. When some artistic things catch on, music, film, what have you, a lot of time the fans of that movement will have a dilemma. When the White Stripes starting getting huge and again when their Icky Thump record sold like weed at Hampshire, fans were perplexed. Many of my friends, Siren Records owner Blair Elliott, and my talented friend (she was in 10th grade when we spoke on the subject) Caitlin Mcginnis were equally stumped, though they were both fans of a kind, who don't give their favor to bands easily. Their point is well-received; this was art that wasn't supposed to catch on. It wasn't music for the masses, it wasn't created in a lab for people to enjoy, they didn't labor over the melodies or instrumentations to make sure they had a commercially viable sound. No, they did it, and will continue to do it because it's what they believe in. So, do fans trust the new affection for the weirdness, or do they rebel against it, citing selling out as the cause. The same I believe can be said of Talking Heads. Talking Heads are...well, I'll say this, I don't know who anyone whose opinion I respect who doesn't like them. They are not as abrasive or brash as the White Stripes, but that they caught on was a triumph for artists everywhere. The product of three RISD students and a guitarist/keyboardiest whose only demand was that he be allowed to finish his year at Harvard, they cannot be said to be commercial (At the very least, they're commercial appeal is completely incidental). They went from making mild psych-pop to blissfully weird idiosyncratic funk-rock in the span of three years and in the process recorded three of the greatest albums of all time. All the while of course, their artistic egos flared like gas ranges. Artists being what they are, these were strange people with big, big dreams. And as is only natural, with those dreams, comes conflict. Their conflicts are rumoured to have persisted up until the moment of their ultimate concerts' start. The concerts in question? Three nights at a theatre in Los Angeles that would be crafted into the ultimate concert experience.

Thanks in part to Jonathan Demme's minimalist style and the elaborate stage show meticulously mapped out by head Head David Byrne and his bandmates Tina Weymouth, Chris Frantz and Jerry Harrison, Stop Making Sense makes for just as entertaining a film as it does a kick-ass live record. I hesitate to praise Stop Making Sense so unabashedly because I have some pretty strong things to say in its favor. Live records are often roped in with studio albums in estimations of popular music. James Brown's groundbreaking Apollo concert or Aretha Franklin's many live performances are usually given rank amongst Let It Be or London Calling (not that there's anyway to distinguish a superior record, mind you), and so it is clear that many people aren't interested in making the distinction. And there are cases like The MC5's Kick Out The Jams, which was both their debut and a live record. Here we have what could have been taken as a live record, a film, and/or a soundtrack to a motion picture, which is how the record is listed in the credits. On the IMDB, Frantz, Weymouth, Byrne, Harrison and their five session players are listed next to their instruments. Alex Weir is his guitar; Weymouth is her bass, Bernie Worell is his keyboard. They aren't playing the parts of musicians, they are playing the parts of their instruments, cogs in the machine of the experience of the band. They are aware of their roles, and fulfill them as good as any troupe of actors has ever. But let us take this strictly as a live record for a moment. If we take the opinion that live shows and/or concert recordings are a much more accurate showing of a bands capabilities, and Stop Making Sense is almost certainly the greatest rock concert ever released, what we have by the transitive power is the greatest performance by any band ever recorded. Though I'm speaking entirely in theoretical terms, I stand by my claim fiercely and gladly stack Stop Making Sense next to Hendrix at Monterey, Live At Leeds, Wilco's Kicking Television, Kick Out The Jams, The Last Waltz, or the televised James Brown performance that prevented riots from breaking out all across America. The real difference between those performances and the Talking Heads' farewell to obscurity was that the Heads were artists and cared as much about aesthetics as they did attitude. They most certainly had the sound to back up their stage presence, but they also had a live show the likes of which had never been seen. I guess it's fitting that former Funkadelic keyboardist Bernie Worrell joined them on stage because the only band who'd ever come close to this sort of hypnotic stage presence was George Clinton's Parliament and their mothership landings.

Where else in rock history can a band's sound be seen to expand as well as heard? We start with David Byrne playing his Martin acoustic guitar next to a ghetto blaster with a drum program on tape. Towards the end of the song a riser is wheeled out by men in black uniforms. This sense of progress, a machine being assembled for enhanced performance, is crucial to the success of the piece. From there Tina Weymouth, the greatest white bass player, joins him with her beautiful blue instrument and her molasses-thick tone, and so do the unseen voices of Lynn Mabry and Ednah Holt. When they've completed "Heaven", Chris Frantz and his military precision start "Thank You For Sending Me An Angel". The machine grows. Jerry Harrison and his black Stratocaster match Byrne's sunburst, the first electric guitars of the evening. Then the band grows to its full size to realize its potential. Worrell and his enormous hands, Alex Weir and his proto-mustang guitar and high-energy bouncing about, Steve Scales and every hand drum imaginable, and Ednah and Lynn who perform the greatest two-person backing performance I've ever seen. Doing the work of the Supremes or the Vandellas, these two girls sound like a choir and have the stage presence of Little Richard, James Brown or Prince. Byrne is something to behold, as well. Alternately marching in time to his own music, writhing on the floor, running laps around the stage, and rocking elastic guitar solos, it's a small miracle he never passed out from exhaustion (I suppose we can thank cocaine). Concerts like this aren't merely art installations, they're marathons and contact sports. Musicians will experience the adrenaline of scoring a touch-down and winning the super-bowl, athletes may never know the sensation of their visions feeding the hungry minds of their fans. Have you ever made ten thousand people dance? People who may never dance again? No other film brings you inside that feeling, of complete artistic success, like Stop Making Sense. The footage of the David Byrne song "What A Day That Was" is particularly compelling. We see Bryne's bulging eyes, Weymouth's nervous glances, Alex Weir chugging away at his guitar, Lynn Mabry and Ednah Holt's bright faces all glaring from above the intense low-lighting. Their shadows dance against the vast walls like tribal gods in wide shots. The band, though seemingly miles apart judging from Demme's close-ups, are so in tune with one another. One moment always gets me, of the consescutive guitar solos on "Crosseyed and Painless" the last song on the record. After watching Weir play rhythm for most of the evening, to see him lose control and deliver a screaming lead that primes Byrne's burning and whirling finishing blows has force enough to wake the dead. Some songs, like "What A Day" only appear on Stop Making Sense in these particular forms. "Psycho Killer" never sounded so clear, "Crosseyed" so high-octane. Some songs, like "Girlfriend is Better" and "Life During Wartime" simply come to life in ways they don't on their respective records. My favorite example of this is the non-single "Making Flippy Floppy" which sounds like instructions from the almighty here; it's absolutely flawless. I've never been so excited by a keyboard.

Stop Making sense is something of an anomaly, because though it is much easier to listen to MP3s today, I've found myself just as compelled to watch the film as I have to listen to the record. To see the movie is to see the world's most progressive rock band in action. It is to witness the melding of art and rock in heaven. It is to understand what all bands have since been striving to achieve, consciously or not. Talking Heads are as essential to today's musical climate as Giorgio Moroder, Michael Jackson, Phil Spector, Paul Simon, David Bowie,  John Lennon, or Keith Richards. They don't get the credit of many of these figures, but, they are crucial to the development of an artists' reception in the 21st century. What other event would allow squares to get behind a man on cocaine dancing in an enormous suit to post-punk disco written by three other dorky white people. (The difference between say The Sex Pistols and Talking Heads: unprecedented talent of all of its members) Stop Making Sense is a testament to the world of the artist combining with the lives of all other people and shall continue to inspire as long as humans can perceive it.
posted by Scøut at 7/01/2008